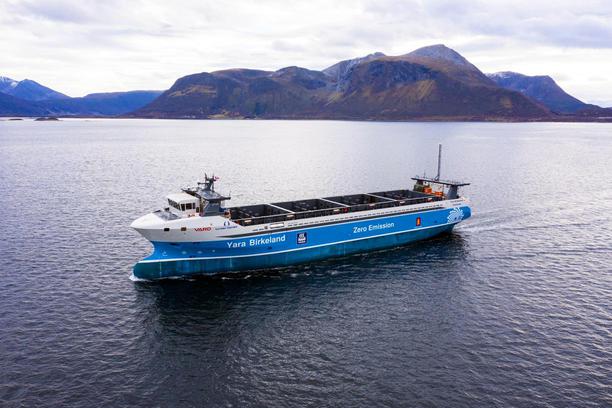 Norwegian all-electric container ship Yara Birkeland will be operational by the end of the year.

Decarbonize 60,000 ships. The challenge is colossal. The merchant navy alone capitalizes 2.9% of greenhouse gas emissions, which is more than the car fleet. A phenomenon that continues to grow as this essential cog in the globalized economy follows the frantic curve of its consumption. 80% of goods transport is in fact transported by sea. According to the Organization for Economic Co-operation and Development (OECD), maritime freight volumes will thus be multiplied by four by 2050. But the sector, which makes massive use of particularly polluting heavy fuel oil, is beginning to feel the winds turning and s is committed to reducing its CO2 emissions by 40% by 2030 (compared to its 2008 levels).

Ten days ago, the International Chamber of Shipping (ICS), the world's largest organization of shipowners, went further by proposing a mandatory tax per tonne of carbon dioxide emitted by ships over 5,000 tonnes. A tax whose proceeds would go to a climate fund intended to finance the installation of refueling stations with less polluting fuel but also to compensate for their higher price. This is because heavy fuel oil not only releases CO2 but also, among other things, sulfur oxides (SOx), responsible for acid rain. Since last year, the International Maritime Organization has also set new, stricter limits for these emissions.

So everything is fine in the best of all worlds? “This new regulation causes collateral damage because we pollute the air less but the oceans more, regrets Delphine Gozillon, expert with the NGO Transport and Environment. We should also remember that many boats still do not sail on low sulfur fuel (VLSFO).” To desulphurize these exhaust gases, most of these ships use seawater and therefore discharge into the ocean waste water containing sulphates and other residues from the combustion of heavy fuel oil. A problem that the Belgian firm Solvay is trying to solve. With success since the chemical giant is currently testing its dry exhaust gas treatment system called “SOLVAir Marine” on the Piana ferry operated by the French company La Méridionale.

Through the use of an absorbent powder, the sulfur is transformed (without using water) into sodium sulphate residue. Which is then filtered along with other particles such as soot and micropollutants. “This filter retains 99% of particles, so that ships will no longer spit out black smoke,” rejoices Thomas Bauer, international project manager in Solvay's Soda Ash & Derivatives unit. It should be noted that this system requires the installation of reservoir containers to store this sodium bicarbonate and these residues. The ship will therefore have to regularly restock with absorbent powder, unload the residues and have them treated on land by the Belgian company.

“Eliminating sulfur does not solve the problem of greenhouse gas emissions, tempers Delphine Gozillon. It is an expensive way to divert investment in zero-emission technologies, such as battery-powered electric motors for small boats, hydrogen fuel cells for medium-sized ships, and e-ammonia or other e-fuels produced from of renewable hydrogen for large ferries and container ships.” Solvay argues: “These technologies are promising but are they developed enough? In the meantime, we are proposing a much less polluting alternative and are also studying the possibility of capturing CO2 and nitrogen oxides”.

In recent years, a new generation of shipowners has emerged and advocates a return to sailing freight, including the French Neoline. Enriched by the sailing technologies of the 21st century, including those of kitesurfing, and assisted by a diesel-electric motor, the shipowner's first cargo sailboat displays beautiful measurements - 136 meters in length, 4,200 m2 of sails, 280 containers capacity – and will save between 80 and 90% of fuel consumption. Its construction should begin this year for a launch scheduled in three years. From its home port of Saint-Nazaire, it will notably serve North America (Halifax and Baltimore).

But it is Norway that will be the first to break the champagne on the hull of its 100% electric and autonomous container ship, the Yara Birkeland. Without a crew, therefore, or carbon dioxide emissions, this first electric freighter should make its first trip between two Norwegian ports by the end of the year, announces CNN. Of “small format”, it will be able to transport 103 containers at a speed of 13 knots thanks to its 7 MWh battery. That's nearly 30 times the capacity of a Tesla. According to its designer, the chemical group Yara International, the autonomy of these batteries should also make the use of cargo more profitable. It should be noted that the Dutch Sendo Shipping has already been operating three river container ships equipped with hybrid diesel-electric engines since last year, and that the ship Ellen, the first ferry powered by electricity, now connects several Danish islands without noise. and smoke free. This boat can carry 200 passengers, 30 cars, and will save, according to the Swiss battery manufacturer Leclanché, 2,000 tonnes of carbon dioxide and 1.4 tonnes of sulfur dioxide each year thanks to its clean propulsion system.

It remains to be seen whether the other shipowners will make the necessary investments to green their fleets or whether they will prefer to keep their fossil-fueled ships by improving the filtration of their emissions. By proposing a carbon tax, the ICS seems to be choosing the second option. It will therefore be up to customers (and their consumers) to choose their mode of transport of the future. Michelin, Clarins, Manitou or Renault have already signed with the French Neoline and its future sailing container ship.